Whenever the largest players in a market come together to share capacity, there is always a cause for concern.  Such was the case with the announcement last year of the intention of Maersk, CMA-CGM and MSC to come together to form a vessel sharing alliance called the “P3”.

Announced a year ago, the P3 would have created an alliance with 255 ships and a capacity of 2.9 million TEU’s over 29 service loops. 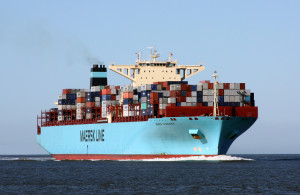 Maersk, CMA-CGM and MSC’s plans for the P3 alliance were dashed this week when China said “no”.

There was predictable concern about this and it was raised to the EU’s governing body to review; and on June 3rd they said they would not open a proceeding to review.

The United States FMC was also reviewing it, but there did not appear to be any roadblocks and gave its blessing on March 24th of this year.

Then, out of the blue, China’s antitrust regulator said no, effectively killing it on the spot, to the joy of the European Shipper’s Council who feared that this would lead to an increase in rates and reduction in service.

The three carriers involved had believed this could lead to a reduction in operating costs of between 5 – 15%, which on their scale translates into billions of dollars annually.

The curious element of the China Ministry of Commerce’s (MOFCON) P3 determination is that there is a belief that the move was made to protect their home carriers, specifically Cosco and China Shipping, not the shipping public.

The future of the G6 alliance comprised of APL, Hapag-Lloyd, Hyundai Merchant Marine, MOL, NYK and OOCL remains to be seen.  That alliance was formed to combat the P3’s perceived and potential dominance.

Ocean shipping faces tremendous pressures on profitability due to depressed rates and carriers are taking steps to reduce their operating costs, including moving to larger and larger vessels which reduce the per TEU carrying cost.  Everyone will be watching with interest to see if there is a further shakeout or consolidation among carriers in the wake of this recent decision.

(Photo credit:  MAERSK EDINBURGH near Cuxhaven, by Wolfgang, CC BY 2.0)