With a one million twenty-foot equivalent (TEU) capacity, APM Terminals, operated by Virginia International Terminals, is the crown jewel of the Hampton Roads terminal facilities.  Opened in 2007, the 291-acre terminal (on a total parcel of 576 acres) at a cost of $450 million dollars is capable of an expansion that could double its throughput to two million TEUs. 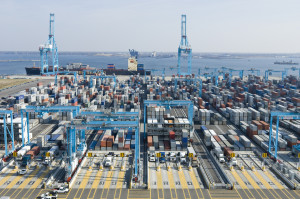 Today’s ports are far different than those of even just a decade or two ago when concerns about technology, security and throughput were secondary to issues of safety, hours of operation and cost.  APM Terminals was developed to meet the rigorous demands and needs of all six of those guiding pillars.  The yard features weight-sensitive booths and remotely controlled cranes, the first of their kind in the United States.  Drivers are required to exit vehicles and stay in a booth for safety reasons while the cranes are loading.

The terminal requires all visitors to be TWIC holders to insure an accurate accounting of persons who are on the port’s property. 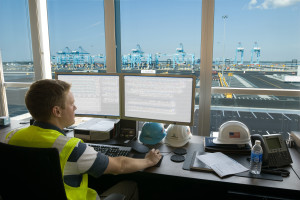 Trucks can arrive and depart quickly through twelve inbound and twelve outbound gates that minimize idling time and environmental impact through the use of optical scanners and RFID readers.  Environmentally, the use of all-electric ship-to-shore cranes and electric spreader bars on gantry cranes reduces emissions and the risks of hydraulic spills.

APM Terminals, a unit of A.P. Moller-Maersk and the same company who owns Maersk Line, owns or operates 69 port and terminal facilities and over 170 inland operations, directly employing 25,000 people in 68 countries.  In 2010, APM Terminals leased the terminal to Virginia International Terminals (VIT) for twenty years and VIT moved carriers into the new facility.  Last year, APM submitted an unsolicited bid to manage all the facilities at Hampton Road.  This offer was rejected by the board of the Virginia Port Authority (VPA), who approved instead to move forward with a long-term restructuring plan for the authority as well as the VIT, the operating authority.

“The restructuring approved by the VPA’s board of commissioners bodes well for the future of the terminal,” says Ben Nelson, III, of Nelson International.  “The Port of Virginia, which was ranked sixth largest North American port in 2012 by the Journal of Commerce, continues to take steps to make themselves appealing to carriers and shippers who have a choice in ports on the East Coast.  Coupled with infrastructure improvements to the port, as well as rail and road projects throughout the Commonwealth, we’re excited to be at the nexus of such potential future opportunities.”