Projected to open in 2015 with the ability to accommodate containerships larger than 5000 TEU’s  (Twenty-foot equivalent units), the widening of the Panama Canal will provide new economic opportunities for the Port of Virginia, the carriers who call the Port and cities and companies doing business with the Port.

Situated nearly equidistant from Hong Kong whether by Panama Canal (11,021 miles) or Suez Canal (11,705 miles), the Port of Virginia provides $12.3 billion in local output, $4.1 billion in employee compensation, $41 billion in business revenues, $1.2 billion in state and local taxes and nearly 345,000 port related jobs statewide according to a 2008 study by the William and Mary School of Business. 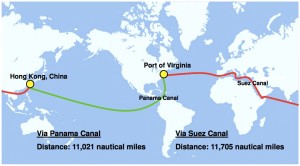 East or west…about the same.

Global ocean carriers are moving to larger and larger vessels because of the economies of scale that reduce per container costs through savings on fuel, port handling fees and other operating costs.

A report prepared by the Weldon Cooper Center for Public Service in January, 2013, highlights the fact that at present, seventy percent of cargo from Asia discharges on the West Coast and half of that moves to the Midwest and East Coast.  The intermodal costs to move this cargo from the West to East coasts add significant landed costs.  By leaving cargo on the vessel, the costs associated with rail or road transit and fuel are reduced by virtue of lower shipboard operating costs and shorter rail transits to inland or coastwise destinations.

The Port of Virginia, recognizing the opportunity that this will afford the Commonwealth, has invested heavily in Hampton Roads infrastructure both shipside and shoreside.  Where Hampton Roads’ competitors are having to dredge to depths between forty and fifty feet to meet the needs and drafts of these large vessels, Hampton Roads already boasts drafts to fifty feet, and the APM terminals are dredged to fifty-five feet.  These dredging programs by competing ports are not anticipated to be finished until years after the new locks are opened.

“Having lived and worked here all my life, I am astounded at the continued trajectory of growth,” says Ben Nelson, III.  “While other ports to the south of us are mired in difficult negotiations for projects, plans and investments, the Commonwealth of Virginia continues to forge ahead with a plan for success and will be ready to accommodate the new world of post-Panamax vessels and opportunities.”

Currently sixth in the nation in annual tonnage, the Port of Virginia is serviced by two Class I railroads, Norfolk Southern and CSX.  These companies have spent more than a combined one billion dollars on improvements to track, bridges and terminals throughout their network to make the Port an attractive, competitive alternative to the West Coast.

Meeting the needs of the Commonwealth for reduced traffic and a positive environmental impact, the James River Barge Service provides a viable means to bypass Interstate 64.  It meets the needs of less time-sensitive or perishable cargo and offers the most fuel efficient transit; an estimated 576 ton miles per gallon of fuel compared to 155 ton miles and 413 ton miles, respectively, by truck or rail.

Investments by the Commonwealth in tax credits and economic development have led companies at the top of the Journal of Commerce’s 2012 Top 100 Importers and Exporters lists to establish or relocate manufacturing and/or distribution facilities in Virginia.

The Port of Virginia, when compared to other regional alternatives, is the superior choice for carriers, railroads, importers and exporters to insure their continued international growth and success as the United States continues to grow trade around the globe.