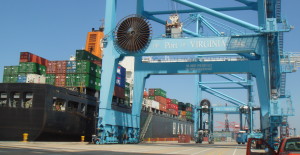 In another successful month, the Port of Virginia shows a 9% increase over March 2016 in container volumes for March 2017 as they moved 232,148 TEUs in preparation for the arrival of the COSCO Development – a 13,000 TEU ship that expects to move 4,000 containers. As this is the port’s 4th best month, there is little doubt that the Port of Virginia will be able to handle super-sized vessels.

On May 8th, 2017 the COSCO Development will arrive at the Port of Virginia, which is the first stop on the East Coast after navigating the newly expanded Panama Canal. After more than a year of infrastructure improvements, including an initial dredge of the harbor to a depth of 50 feet that is expected to eventually reach 55 feet. It’s the only port on the East Coast with Congressional approval to reach that depth. In hopes of being able to host the new mega-ships, a $350m infrastructure program was started last year to upgrade and expand after traffic congestion in 2015 almost shut down the port. The expansion has re-energized the port, which has consistently showed month over month growth in volume and productivity, culminating in the port becoming profitable in 2016 for the first time in seven years.

“March was the fourth busiest month in our history and our growth was 9 percent when compared with last March,” said John F. Reinhart, CEO and executive director of the Virginia Port Authority. “We are expecting volume to remain in positive territory as we move into spring and look forward to peak season. The new ocean-carrier alliances will be fully operational this month (April) and we will be seeing more big ships, like the COSCO Development, moving considerable amounts of cargo. As these ships arrive, planning and preparation are going to be paramount to our efficiency.”